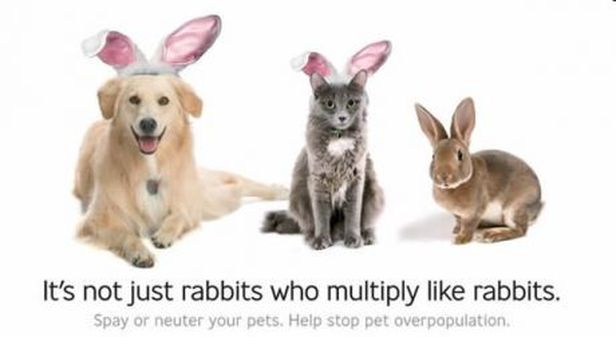 This month’s blog post is about neutering. I chose this subject because I think it’s an extremely important one, especially in this country, and also because recommendations for neutering have changed in recent years and I want to make sure all our clients know what advice is to be trusted and what advice should be taken with a pinch of salt (hint – 90% of what is on google!). everyone seems to have an opinion on this subject, and in some ways no one is entirely right or wrong. I hope to outline my opinions in this blog and what Briarhill recommends for patients under our care.

A few short years ago, it was recommended that all dogs and cats were neutered at 6 months of age regardless of size, breed etc. it was a blanket “rule” that didn’t really take the individual patient into account. We now know that we need to look at each patient’s individual circumstances and base the decision on when to neuter on that animal’s age, breed, size, health, environment and behaviour. Here’s an example of how seemingly similar animals might get different recommendations: Two labradors, one male and one female, come in to see Ruth for their 6 month developmental exam and the Owner wants to know when to neuter them. They are siblings and are quite a handful! The male is very timid and scared, he is showing signs of fear aggression during the exam and the owner notes that he reacts fearfully to any new situations. He has no physical problems to prevent neutering at this stage but Ruth feels it is best to delay neutering in his case until he is at least one year old. She makes this decision for two main reason 1) This boy is still not fully grown at 6 months and some studies suggest that early neutering MAY be linked to certain cancers in larger breed dogs such as labradors and 2) neutering eliminates testosterone from the body. Testosterone is known as a confidence building hormone and so fearful dogs should not be neutered ideally until they are behaviourally stable. The second labrador, the female, is a sibling to the male. She is very happy and confident for her exam. She is both physically and mentally perfect but the owner notices that the male is beginning to show interest in her such as attempting to mount her. In this situation, we recommend spaying her now. The risk of an unwanted pregnancy is greater than the risk of developing any problems from spaying at 6 months of age.

You can see from this scenario that there is no hard and fast rule any more, but more so guidelines. Here’s a brief overview of what we recommend:

– Cats can be neutered from 12 weeks of age onwards, it is best to neuter before any unwanted litters of kittens so the sooner the better!
– Small breed dogs (anything 10kg and under at adult weight) can be neutered from 6 months of age. The exception to this rule would be if a male dog is showing signs of fear aggression – neutering should be delayed in this case ideally.
– Medium sized dogs (10-25kg at adult weight) should ideally be neutered from 6-9 months old. It is best to spay a female BEFORE her first heat if possible – this massivlyt reduces the risk of mammary tumours developing in later life.
– large breeds (25kg and over fully grown) should ideally be left until they have reached their full adult weight before neutering, usually this is at about 12 months old. This is to reduce the risk of bone tumours later in life.

This of course is just a rough guideline and in order to know what is best for your pet, we advise talking to us directly so we can make a decision based on your individual circumstances. Please bare in mind that the risks outlined are small and the benefits of neutering by FAR outweigh the risks. The benefits include:

FEMALE DOGS
● It is nearly always best to spay a small bitch before her first season. This eliminates the risk of unwanted pregnancy, dystocia and the physiological and behavioural changes associated with the six-monthly reproductive cycle. It also dramatically reduces the risk of mammary cancer and eliminates the risk of pyometra, which occurs in 23% of intact females and kills approximately 1% of intact females. The risk of a non-neutered female dog developing mammary tumours during her life drops from 70% to 0.5% if neutered before her first heat. Mammary tumours are the most common malignant tumours in female dogs – neutering before 2½ years of age greatly reduces the likelihood of this cancer. Osteosarcoma is very rare in small-medium breed dogs.
● Early neutering also confers health benefits to large breed and giant breed females such as reducing or eliminating the risk of mammary tumours, unwanted pregnancy or pyometra. However, there is no evidence to suggest that allowing a bitch to have a litter of pups confers any health benefits.
● Neutering eliminates pseudo-pregnancies and reduces the risk of perianal fistulas, while removing the risk of uterine, cervical and ovarian tumours.

FEMALE CATS
● Entire cats are seven times more likely to develop mammary cancer than those spayed at puberty. Mammary cancer is the third most common form of neoplasm, though with a lower risk than in female dogs. 80% of feline mammary tumors are malignant.
● Neutering female cats also prevents pyometra, which though not common in cats, is not unheard of.
● Prevention of unwanted pregnancy/litters, eliminates the risk of dystocia.
● Spaying eliminates or reduces the occurrence of certain feline behaviours.

MALE DOGS
● Castration eliminates the risk of testicular cancer, the second most prevalent cancer among male dogs.
● Castration dramatically reduces the incidence of other non-cancerous conditions of the mature prostate (e.g. benign prostatic hyperplasia, prostatitis/prostatic abscesses, prostatic cysts and paraprostatic cysts). Prostatic hyperplasia starts at 1-2 years of age with 95% of dogs affected by 9 years of age.
● Castration dramatically reduces the risk of tumors of the perineum such as perianal adenoma, and perianal fistulas.
● It may possibly reduce the risk of diabetes.
● Castration can reduce aggression and dominance in male dogs and sibling rivalry, minimises territorial marking with urine, lessens the likelihood of roaming/straying, and dry humping cushions, owners legs etc.

The most important benefit for that applies to ll is that by neutering your pet, you are contributing to the huge pet-overpopulation problem we have here in Ireland. We do not need any more puppies and kittens until all the currently homeless ones are sorted!

Please see: http://spayaware.ie/Spaying%20Benefits_2013.pdf for more info. Until next month!

Dental X-rays - what lies beneath the surface!
Our Neutering trip to Greece!